The nursery school, called “Communauté Enfantine” is for children as young as 2.

This is the ideal bridge between life at home and school: A familiar environment where each child opens up and progresses at his or her own pace.

The preschool, called “Maison des Enfants” is for children aged 3 to 6 years old.

It consists of 4 areas, each one is allocated to a fundamental subject and contains specific equipment that is presented to each child individually:

• practical life: taking care of the environment and the person

Practical activities to develop the person, his or her concentration, and the rational organisation of his or her thoughts. The practical life equipment is used to allow children to assimilate cultural codes and improve their fine motor skills.

Maria Montessori said that “there is nothing in the intellect that has not gone through the senses”. This equipment invites the children to classify, rank, sort, pair and build gradations, which allows them to have concrete experiences and move towards their conceptualisation by acquiring the appropriate vocabulary.

This equipment allows children to express their thought properly, to work on writing and reading in a sensory and structured manner. The classroom also has a space allocated to music, arts, science, and geography equipment, which are all forms of language.

With this sensory equipment, the child experiments mathematical concepts and develops his or her analysis abilities. The children discover numbers, the decimal system, large mathematical operations, geometrical shapes, and their representation.

At this stage of his or her development, the child is asking: “Help me to think for myself”.

The child has new abilities, he or she is able to apprehend abstract concepts, reason, and imagine. The child is starting to affirm his or her intellectual independence. The child is a cultural explorer.

In addition to the 4 main subjects of Montessori preschool, 4 great themes are introduced. In parallel the children are introduced to the men and women who have left their mark on the development of humanity. This answers the children’s need to identify with extraordinary people.

The children are also taught to organise themselves to work in groups so that they can all find their place and respect the place of other children. We are also talking about the idea of justice, because the child’s ability to judge is under construction.

Maria Montessori invites us to see the universe as a great “intelligent, coherent, organised and alive” organism in which the human being is an actor of the evolution of life, endowed by the nature of intelligence and individual consciousness. The education of children from 6 to 12 years old is done around 5 major lessons presenting a global and coherent vision of the universe, the civilisations, the discoveries and the inventions of humankind to the children:

• the creation of the universe and of our planet, the interdependency and collaboration of the various players, the natural laws, the physical and chemical properties of materials, geography, astronomy, geology, etc.

• the evolution of life on Earth, from the cell to the organ, as an introduction to botanic, zoology, and the concept of space-time.

• the apparition of mankind on Earth and its evolution until us, the fundamental physical and spiritual needs of men, their characteristics and talents, history and biology, etc.

• the invention and evolution of communication systems and symbols (languages, writings, arts, etc.) used by mankind through the study of different human civilizations, etc. 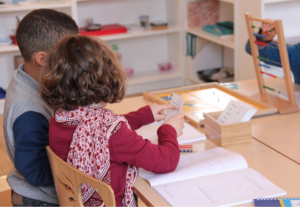 These great lessons are presented to children as stories, fables, illustrated with concrete experiments (the different states of matter and their transformations for example, etc.). Frescoes and symbolic images are used to feed the children’s imagination.

We also take into account the curriculum of the French Education Nationale as published by the French authorities.